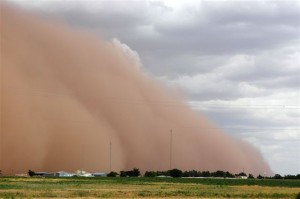 LUBBOCK, Texas — Winds gusting at more than 70 mph churned up a dust storm that swept through the Texas South Plains Monday afternoon. Dust kicked up by westerly breezes ahead of a strong cold front restricted visibility in Lubbock to about 5 miles all afternoon. That was nothing compared to the 8,000-foot-high rolling dust cloud that moved through the city just before 6 p.m., dropping visibility to between zero and less than a quarter of a mile. North winds gusting as high as 74 mph had begun forming the dust cloud about 100 miles north of Lubbock around 4:30 p.m., he said. No injuries were reported from the dust cloud. The dust cloud was yet another byproduct of the persistent drought in West Texas, Ziebell said. The U.S. Drought Monitor map released Oct. 11 showed much of Texas, including the South Plains, were still experiencing “exceptional drought” — the most severe category…

From Gwen: The last decade has been used as warnings to get each member out of debt both economically and spiritually – making us aware of saving more and spending less for the days ahead. This is not news to people who are familiar with the word of God. The droughts and floods continue. It’s a year many Texas farmers hope to forget, as losses soar to a record high, making it the most costly drought on record – the state taking a 5-billion- dollar hit, primarily in Livestock and staples such as corn and wheat. A 100-mile-wide dust cloud was reported in Phoenix, Arizona on July 6, 2011, and there was also a dust storm in Tuscon, Arizona on July 19, 2011. These are not all separate, unrelated indices. God has been and is setting the stage for uncertainty and disasters that are described in graphic detail in Deuteronomy 28, where God is professing that nations that are disobedient become the tail and not the head – they will lend to no one and borrow from everyone, the land will not produce crops and become a dust cloud and in the end will live under oppressive enemies. Deuteronomy 28:23-24 says, “The sky over your head will be bronze, the ground beneath you iron. The LORD will turn the rain of your country into dust and powder; it will come down from the skies until you are destroyed.” 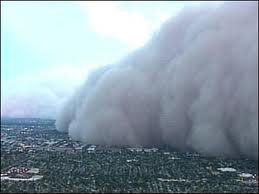 There is nothing new under the sun, and these words are real. These curses and these blessings are real. What people do not want to believe is that consequences are real, and I say this with the greatest humility and with only love, because the only reason I am saying this is I am wanting the best for each and every person. Blessings and curses are from God for good or bad behavior. There are no mysteries as to the future – the cause and effect is clear. The progressive destiny of a life of disobedience and greed for more and more detailed is in Deuteronomy 28. Likewise, the life of blessings for a community of righteous people is clearly outlined. Why? Because one points to God and one points to paganism. Humility and repentance of a community of people is our only hope. Those who humble themselves to obedience to God and reverence to His ingenious 10 commandments will be blessed. Obedience to God boils down to loving Him first and foremost and then simply loving your fellow man – controlling yourself – no stealing, adultery, murder, greed, etc. Destruction has always been in store for those so arrogant as to mock or despise their Creator, but people are obviously unclear when it comes to blessings and curses. People call themselves blessed when they have been cursed, and this needs to be cleared up. You have to experience the blessings here to see the contrast. Material wealth or things cannot be the measure alone, because wealth could be hoarded or obtained through greed. The sign of God’s blessing is a daily relationship with God where you receive answered prayers and the result in is an obedient, joyful heart in all circumstances, knowing that God has allowed all things. The sign of God’s approval is the Spirit of God in your heart.

Our Remnant Fellowship worship services are all bright occasions in the midst of a decade of dark clouds which are on the horizon of our future. This is a joyful bright crowd to be around – no one on drugs for a high, which says a lot. God is real and the love of God is more fulfilling and exhilarating – obviously a secret to many people! This is a pond of happy fish and this in an obviously growing sea of unhappy, angry people. All recent data is showing 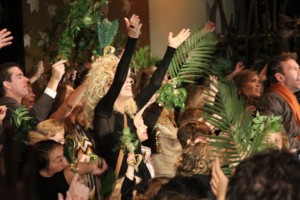 drastic increases in anti-depressants, masking the growing anger and hate – emotions that are on the rise at earlier and earlier ages. Hard times are no excuse – hard times are simply telling. During prosperity, your character does not show. Bring on the heat and you will see the foundation of your heart – hate or love. It boils down to compassionate love or selfish, greedy hate that is always annoyed for it expects from man, not God. Hate, malice, slander, and jealousy are sins which represent the absence of faith in God and the presence of God’s personality or Spirit in your heart. Love is from the heavens and hate is from the dark side. Your actions and many times those closest to you can show you what is in your heart. Love for God never fails in relationships and in salvation with God.