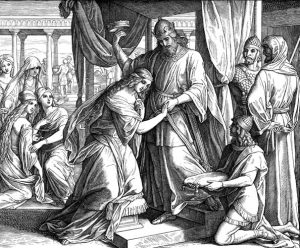 invited in or ushered in, and they had two years of beauty treatments, and out of all the most beautiful women in the world, Esther, an orphaned Jewish girl, was chosen.  However, her uncle Mordecai, who raised her, warned her once she was chosen to be his queen, not to let the king know that she was of Hebrew origin.  Now, Esther is raised humbly under the exile and is fully under the authority of her uncle.  I am sure it was difficult times, and by the world’s standards, she was old enough to break away and make her own decisions.  But look at the contrast.  Queen Vashti despised authority and yet lost her position; yet Esther, living humbly, lived by every word of authority, and because of this she was raised to second in power next to this world-class King.

This parentless Esther is now Queen Esther, and she continues to do as Mordecai said and did not disclose her nationality.  One day Mordecai, who often sat at the city gates, overheard of a coup d’état, a rebellion.  They are whispering at the gate that they are going to murder King Xerxes and take over his throne, so Mordecai relays the story quickly to Queen Esther who in turn then respects her husband and this king and the authority above her so much that she lets him know and saves this king from this terrible tragedy.

It is not unusual for there to be evil men who are in high positions in any kingdom.  One such man was a man named Haman.  He had worked his way up to being second in command in Persia, in the Persian government.  Haman despised the Jews, and he despised Mordecai, because Mordecai could see right through him and therefore would not bow in his presence.  This enraged Haman…” 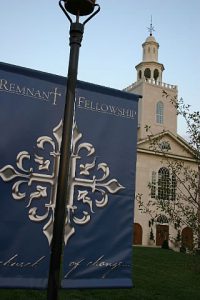 Introductory thoughts leading into this weekend’s Wedding and our PURIM Celebration…and there are MANY more where those came from!

This weekend marks the Remnant Fellowship’s observation of “PURIM.”  And what better way to celebrate PURITY and DEVOTION to GOD…than to take part in a beautiful Remnant Covenant WEDDING Ceremony!  Randle Catron and Amy Baldwin will be united in marriage this coming Sabbath Day – that is, Saturday, March 26th.  Our music and webcast will start at 4:30pm and the Processionals will start at 5:00pm.  Don’t miss this great opportunity to witness a couple who won’t JUST be joined together as one…but also to remember that such devotion STARTS with living for GOD FIRST.  Then, HE blesses those who make Him their everything.  Randle and Amy are emulating this example set by Queen Esther centuries ago…meaning that they live to see GOD’S Truth proclaimed through this message and His people lifted up, protected, and honored.  JOIN US this weekend and SEE a couple…and an entire Church…who live to glorify GOD Almighty!