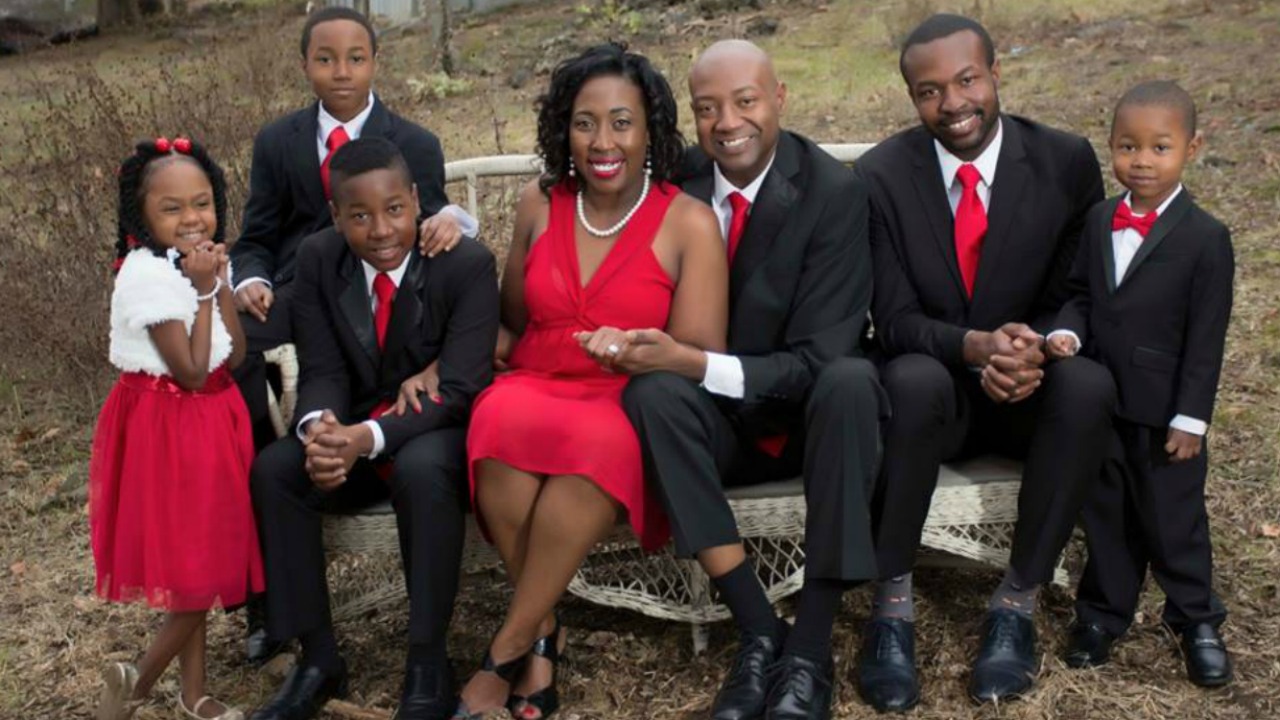 Weigh Down Ministries has changed hundreds of families lives. But for Terrell and Dana Cohen, the past two years has been nothing short of miraculous. They have changed physically with a remarkable 286 pound weight loss including their sons Damian and Damani. But the Cohen’s have completely changed on the inside too thanks to God and the teachings of Remnant Fellowship. They have left a former church that was full of legalism and pride for a whole new freedom from idols with a total love for God alone. 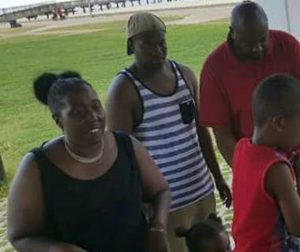 Before finding Weigh Down, the Dana Cohen struggled with excess weight and numerous health issues.

It all started with an email from Weigh Down when Dana’s life was completely changed. It was June 2015 and the email invited Dana to join a Weigh Down Basics class for FREE! Dana’s family was living in Hampton, Virginia at the time. Little did the Weigh Down office know that the night before she and her husband Terrell had prayed for help to lose weight. But God knew! Just 24 hours prior, they had prayed for God to lead them to what He wanted them to do in regards to losing weight and growing their relationship with Him. Dana had just been asked to lead a Bible study class on weight loss in their former church. So to Dana’s surprise she woke up to the email the next morning. She signed up for the Basics class right away but was still hesitant.

Dana had read Gwen Shamblin’s The Weigh Down Diet and Rise Above back in 2000. She says, “I didn’t fully grasp what I was reading because I honestly didn’t want to give up my best friend (food). I was a mother of two, about 20 pounds overweight and very depressed. Many of the women including the leaders of my church said I didn’t need to lose weight. For me that was a good enough reason to keep my love affair with food.

“Over the years I could never forget the principles I learned with Weigh Down. I would occasionally attempt to apply them. But as the testing got hard, I would decide that I was already doing enough for God. I reasoned that He didn’t actually care about a few extra pounds with all that I was already doing for Him. Looking back I feel so disgusted when I think about the pride!! Yuck!!! Who was I kidding?

“Those few extra pounds quickly became 126 extra pounds.  Well after many years of dieting I was heavier than I would have ever imagined. This once very athletic girl was now a very overweight, unhealthy, miserable woman. I was suffering from depression, high blood pressure, fibromyalgia, hypothyroidism, and a failing marriage. After I had my sixth kid I cried out to God for help. I was afraid I would not be around to see my younger children grow up. I would lay awake at night with heart palpitations begging God to allow me to wake in the morning.”

Their son Damian was also overweight. So Dana and Damian began working out every day. They were walking 5 miles a day and even doing P90x. Dana gave up flour and sugar. Then she tried Weight Watchers. Dana explains, “After going hard for a whole year of consistent exercise and dieting I lost a whopping 20 pounds. Praise God!!! I am so grateful He would NOT let me lose the weight my way!! I could not hold on to my love of food and lose the weight. I would have to fall in love with Him!! So beautifully sweet of God!! It brings me to tears.” 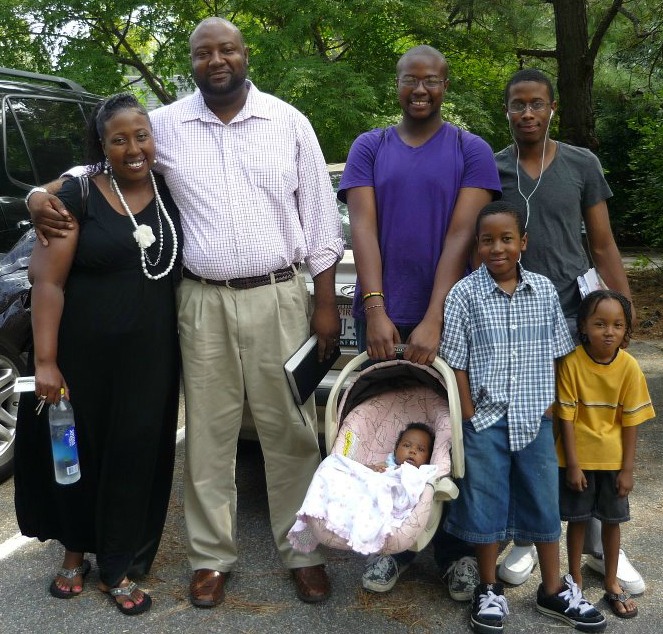 Needless to say Dana was desperate, humbled, and surrendered when God brought her back to Weigh Down. She joined the Weigh Down Facebook group and signed up for the rally June 1, 2015 from her home in Virginia. “I could not believe how much was given to me. It blew my mind! So much instant love. I was given an accountability partner who was always there for me. She got on Truth Stream (now All Access) for constant encouragement and was put in an online Weigh Down Basics class.

“There was NO reason I could not make it because God had provided everything I needed for success through Weigh Down. My 12-year-old (Damani) at the time was about 25 pounds overweight. He decided he would take the classes with me. We saw immediate fruit. We could stop in the middle of a meal and wait for hunger. It was so fun and we felt closer to God. The pounds were melting away but more importantly so was the hardness on our hearts. Damani and I were laying down pride, selfishness, faithlessness and anger. We were transforming into new people from the inside and out. As a result my 18-year-old son Damian and my husband Terrell joined Weigh Down!”

Dana’s Down 105 Pounds with a Complete Love for God!

Dana has lost an incredible 105 pounds by following the principles of Weigh Down. She no longer suffers from hypothyroidism, fibromyalgia, and depression. Her marriage is completely healed. She says, “I am more in love with my husband than ever. Best of all, I am falling deeper and deeper in love with our most amazing Heavenly Father every single day that I am allowed to breathe!!! God is definitely in the miracle business! He is so faithful! I am so grateful He never gave up on me. It is humbling to think of how he sought after me and my family! 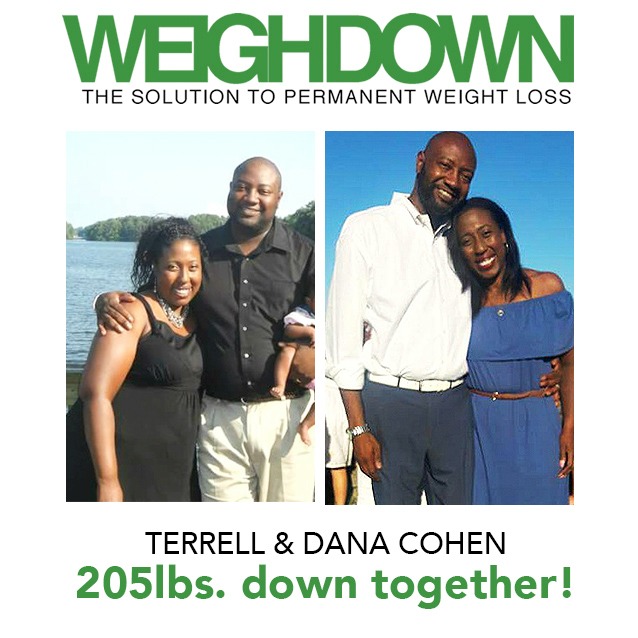 “After 20 years, I finally learned the missing link in my relationship with God was my limited love for Him. I didn’t love Him with ALL my heart, mind, soul, and strength. He hadn’t forsaken me; I had forsaken Him. I loved the food more and I loved myself more. I knew when I heard Gwen during the Basics class that she loved God with everything and that she would be able to teach me how to do the same. I longed for that same love affair with God.

“As a result I watched countless You Can Overcome shows, constantly listened to Weigh Down radio, and did all my homework for the Weigh Down Basics class. I would not miss a class! Since then All Access, History of the Love of God, The Tablet and remaining in classes have been my daily essentials for keeping focused UP on God and off of food and my desires. My life has forever been changed!! Praise God!! I am a new creation!! If God would do this for me, He will do it for you too!! The question is: Will YOU go ALL in for Him?”

The email Dana received back in 2015 came as a total shock to her husband Terrell. He explains, “When Dana came to me and asked what diet plan she should do to loss all her excess weight, I knew she was seeking something that God would bless. We both prayed to God for the plan that God wanted her to use, and when that email  from Weigh Down Ministries came that next day for a free Basics Class, I was stunned. We had never given Weigh Down our email address. We had never contacted Weigh Down and did not have a computer or email address when Dana read the Rise Above book in 2000!

“We immediately knew it was God answering our prayer. Watching Dana start the class with our 12 year old son and seeing them both lose 7 pounds the first week got my attention. I joined about a week later to support her, not realizing how much greed was in my own heart. As soon as I started listening to the classes, God spoke through Gwen Shamblin to my heart.

Terrell’s Down 100 Pounds with a Complete Heart Change 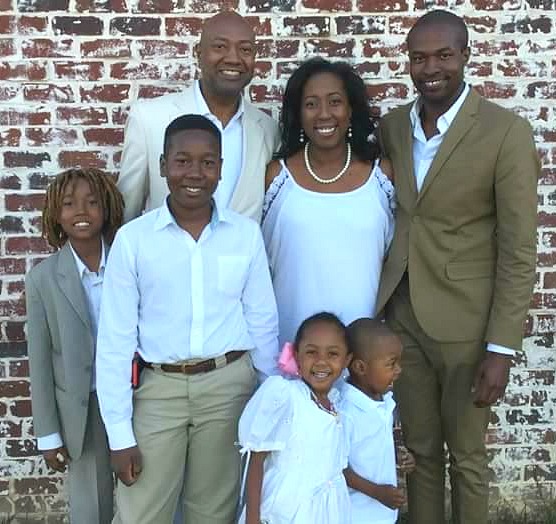 “I began to change every part of my character. I stopped my greed and lost 100 pounds. I was able to take my thoughts captive and stop lust and sensuality. I became less angry and selfish. I stopped overspending, learned to cure my anti-authority and began to be more humble. I used to be so selfish that I would spend all day Sunday watching football and eating. I did not focus on investing in my children or marriage.”

Now Terrell has learned to invest in his family and his marriage to Dana has been completely healed! He is passing on his love for God to his children and teaching them by his actions how to be a Godly husband and father. In addition, God has completely healed their finances and relationships with extended family and friends. The Cohen’s have formed a great bond with our leaders Durville & Sara Patton.

“I was healed from over-drinking and praise of man. I now have many friends and brothers who share a love for God and a passion to do what is right and holy! Because of God’s mercy he led me to true repentance connected to an entirely new life. I praise God for this ministry that has given me life to the fullest!”

Damian’s Down 56 Pounds with a Hopeful Future 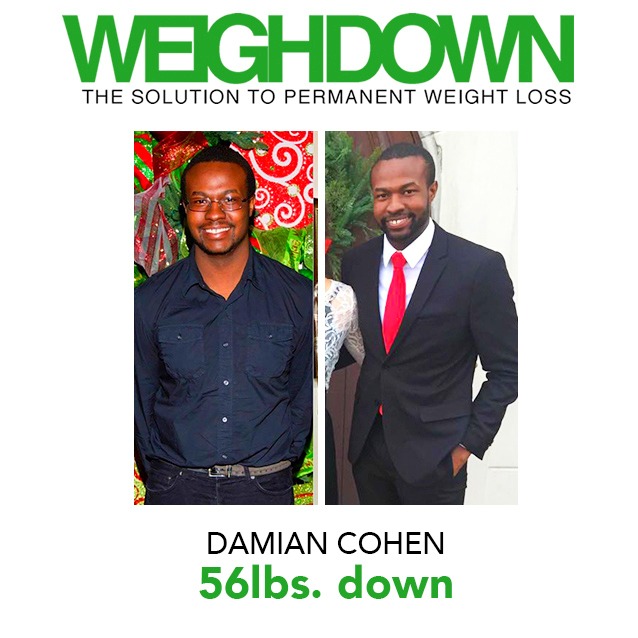 At just 20 years of age, Terrell and Dana’s son Damian started his Weigh Down journey one year ago. Damian says, “I was convicted seeing my mom go all in for God and lay down her will for a relationship with Him. When I saw my little brother start losing weight with Weigh Down, my prideful self wanted to join just to outdo him!”

God began doing a work in Damian’s heart to humble him. His connection with the Father grew through answered prayers because of his new obedience. “God showed me all I was praying for through amazing testimonies on the You Can Overcome show and Gwen’s lessons at Remnant!! I learned how to have an actual relationship with God! A true relationship! Something tangible and real!

“My parents joined the church before me. The Remnant seemed real through the TV camera but I still had some doubts. I had personally witnessed hypocrisy all my life.” But when the Cohen family visited the Remnant in person at Feast of Harvest the fall of 2015, they experienced a church that was real and genuine. So much so that the family wanted to move from Virginia to Tennessee.

When the family returned home after the festival, God convicted Damian’s heart once more. “The people I knew back home appeared like zombies to me! It scared me and I felt sick at the thought of returning to this blindness! I left our former church after that because even though Remnant was far, it felt close in my heart. We were bound together by truth!! I left with no remorse or sadness!

I knew there was LIFE at Remnant! When I joined the church, I instantly felt the bondage of Egypt leave me! Since that time,  I have been freed of 56 pounds, tons of pride, laziness, anger, selfishness, impurity and more! Praise God for this message and praise God for the Remnant!”

The beautiful Cohen family now live in Tennessee and continue to be an encouragement to so many through their involvement with Weigh Down International. You can watch Dana on the You Can Overcome show episode, “How to Have the Right Body Image” with Gwen Shamblin, Candace Anger and Denise Thomas: